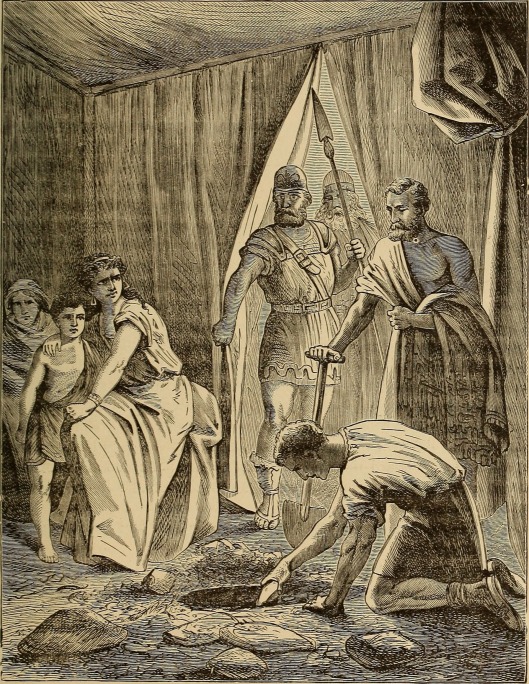 You can find the previous study guide here:

The SIXTH direction is,—

Consider what occasions, what advantages thy distemper hath taken to exert and put forth itself, and watch against them all.

Quite simply: look for the things that tempt you and avoid them.

As Jesus admonished Peter in the Garden: “Watch and pray that you may not enter into temptation. The spirit indeed is willing, but the flesh is weak.” Mark 14:38 (ESV)

32 “But concerning that day or that hour, no one knows, not even the angels in heaven, nor the Son, but only the Father. 33 Be on guard, keep awake. For you do not know when the time will come. 34 It is like a man going on a journey, when he leaves home and puts his servants in charge, each with his work, and commands the doorkeeper to stay awake. 35 Therefore stay awake—for you do not know when the master of the house will come, in the evening, or at midnight, or when the rooster crows, or in the morning— 36 lest he come suddenly and find you asleep. 37 And what I say to you I say to all: Stay awake.”

34 “But watch yourselves lest your hearts be weighed down with dissipation and drunkenness and cares of this life, and that day come upon you suddenly like a trap. 35 For it will come upon all who dwell on the face of the whole earth. 36 But stay awake at all times, praying that you may have strength to escape all these things that are going to take place, and to stand before the Son of Man.” 37 And every day he was teaching in the temple, but at night he went out and lodged on the mount called Olivet. 38 And early in the morning all the people came to him in the temple to hear him. Luke 21:34–38 (ESV)

What is the connection between preparing your heart and life for Jesus’ return and avoiding sin this afternoon?

Illustration: Whenever you teach an idea always follow up with a picture; give an illustration. Illustrations help the hearer (1) apprehend the idea and (2) remember the idea.

Here Owen gives the illustration of diet and health. Some types of food may not sit well with our stomach. We note those foods and avoid them. Certain plants or animals may cause an allergic reaction — we will remain the things which hurt us and avoid them.

What sorts of foods, animals, plants or circumstances do you avoid because those circumstances make your body hurt? Have you ever made such an observation about your temptation and sin? Why are you more careful about avoiding a stomach ache than sin? What does this tell you about how seriously you consider sin?

The Bible is filled with illustrations about how making oneself available for temptation leads to sin. In the following examples look at the passage and then consider the progression from circumstance to sin:

Temptations artfully suited to one’s circumstances. Satan has a hellish art of framing his temptations upon his observation of people’s circumstances, wherein they are most likely to take with them. Thus Christ being an hungered, the devil tempted him to distrust, Matth. 4:3. Job was tempted to blaspheme and despair under his afflictions. Achan was tempted to steal, a fair opportunity offering. Thus he has his temptations suited to the age and the young, the poor and the rich, the jovial and those of a sorrowful heart. He knows, that in such a case he rows with the stream, and is most likely to prevail

Sin has a devilish ability to conceal itself. When it comes to temptation, sin does not point to its real aim, rather it points to some lesser sin and a greater desire. Owen gives this example:

The story is found in 2 Kings 8:7-15. There is an old saying, “When one falls into adultery, he doesn’t fall far.” Spectacular sins have small beginnings. A thousand mile journey begins with opening the door.

Consider the psychology here: The most vicious political criminals rarely began as vicious men. There are a series of small compromises which lead one to become a monster.

Here are the points to consider first:

Knowledge, Affections (emotions & desires) and Actions all support & reinforce one another.

Next — and this is more difficult — pay attention to how the act of sin changes both your desires & knowledge. You ate the cookie, which you to desire to more cookies. Having eaten a cookie, it didn’t look like such a big deal to one more cookie.

First, When the soul readily closeth with temptations, or when it is a force you cannot withstand: Prov. 7:21, ‘With her fair speech she caused him to yield; with the flattering of her lips she forced him.’ Easiness of insinuation, efficacy of operation:. James 1:14, ‘Every man is tempted when he is drawn away by his own lust and enticed.’ You are at sin’s beck. If it say, Go, you go; if it say, Come, you come. As the angels, Ps. 103:20, ‘that do the Lord’s commandments, hearkening to the voice of his word,’ so they hearken to the voice of their lusts, whatever cometh of it. If envy and malice bid Cain kill his brother, he will break all bonds of nature to do it. If ambition bid Absalom rebel against his father, it shall be done, and he is up in arms presently. If covetousness bid Achan take a wedge of gold, he will do it. If adultery bid Joseph’s mistress tempt her servant, she doeth it. That is done readily which sin willeth and commandeth to be done; we are as ready to yield to temptations as our corrupt heart to suggest them. We are at the beck of sin; we cannot withstand it, whatever checks and reasons we have to the contrary.

Prepare a temptation journal. When dealing with a substantial sin, it is necessary to note the nature of temptation. Make a journal which lays out the time, place, nature of the temptation. What sort of things happen before or afterwards. If you see a

In Precious Remedies for Satan’s Devices, Thomas Brooks that on we are lead onto sin by presenting ourselves to the temptation:

First, know the Scripture: find, read, meditate upon and obey those commands in Scripture to avoid temptation: “Abstain from every form of evil.” 1 Thessalonians 5:22 (ESV) Take the time to find these commands. Rather than read these commands as legalism, understand them as warnings — similar to the traffic sign on a dangerous road. Take the time to know the road. Many Christians seek to “know God’s will”, when God has often made His will clear. 1 Thess. 4:3.

Second, you will not part with a sin until you part with the temptation to that sin:

Third, think of the saints who have gone before you. They made it safely because they turned from temptation.

Fourth, if you turn from temptation, you show evidence of God’s grace in your life.