The previous post in this series from William Spurstowe’s 1666 book of meditation may be found here. 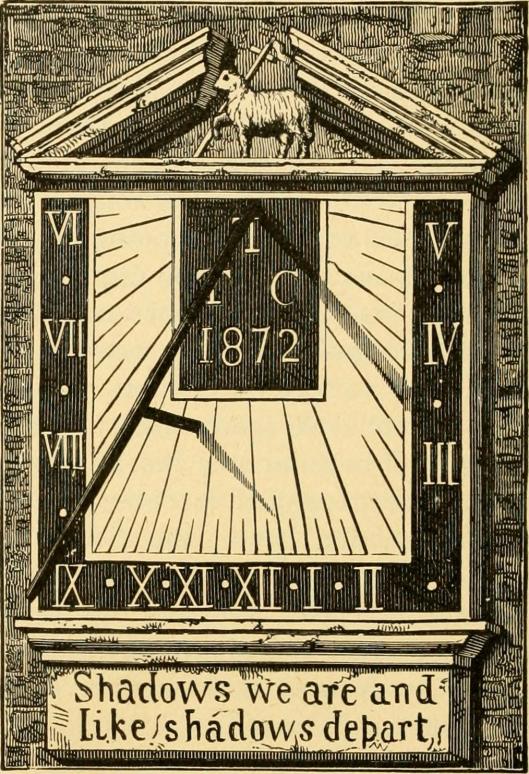 It was the saying of one, who was none of the least of philosophers, to him that asked him what he was born for? That it was to contemplate the Sun: But though it not be the end of man’s breath, yet it may well be the object of his thoughts, in regard both of its beauty and motion.

Holy David takes notice of them both in the same Psalm, in which he compared the sun for its lusters to a bridegroom coming out of his chambers clothed in such shining array as may draw the eyes of spectators toward him. And for it swiftness to a strong champion, who runs his prescribed course, both speedily and unweariedly.

Tully in his Academical Questions, said, Tanta invitation fervor ut jus celeritous quanta fit ne cogitate quid posset. It is whirled about with that vehemency that the greatness of the sun’s speed cannot be easily imagined.

Is it not been a riddle, that at the same time when it travel thousands of miles in the heavens, it should make so slow motion and progress on the dial as to not move above the breath of an inch or two? To the quickest ey its motion is imperceptible, and so it moves, as we can only say at has moved, not that it does move.

Now from whence comes this inequality, but from the vast disproportion between the heavens and the earth, the one being but as a center or small prick to an immense circumference.

Oh how happy and regular also with the lives and actions of men be if after the same manner they were moved heavenly and earthly objects? To the one with the swiftness like that of the sun in the firmament: to the other with any insensibleness like to that of the Sun upon the dial. Surely such a disproportion does the differing worth and excellency between the one and the other just leave challenge in our pursuit of them.

Is it not meet that he who cast a single glance of his eyes to the creature, should bestow a thousand looks upon his Savior? And when he creeps to one as a snail, to fly to the other as the Eagle to the carcass. He alone moves to God as much as he ought, who moves to him as much as he can, and strives to repair the imperfection of that motion what the real dislike and regret of the slowness of his own heart to the best of goods.

If the rule by which man walk must be bounded or dilated according to the object to which they move, where shall we find that person that does proportions the outgoings of his soul and his care, desires, or industry? If the standard and measure of goodness should be taken, from the unwearidness of men’s travels, from the strength of their affections, or from the fixed bent of the resolutions to obtain what they desire to themselves as their end: who must not put the crown of blessedness up on the head of the creature which ought to be set at the foot of the Creator?

Who must not then conclude that it is better building tabernacles here and seeking a country which is above? Do not man contract their hearts to the things of Heaven and dilate them to what is below? Do they not run and pants to the very breathing out of their souls after perishing vanities, when they cannot be drawn to set one foot toward spiritual and divine excellencies? Do they not take the wings of the morning and fly to the utmost end of the earth in their musings and thoughts to find out riches that will not profit in the day of wrath? When their essays to heaven or as weak as the grasshoppers, who only give a small spurt upwards and then fall down to the earth again.

Oh that I could with plenty of tears bemoan that monstrous ataxia enter verse and his which sin has wrought in the most noble parts of man. Was not the agility of mind giving on to him by God, that he might have his conversation in heaven though his abode was on earth? And that he might entering to the holy of holy’s, not like the high priest wants year, but in every prayer in duty like a winged angel to behold the face of God, and to look into those things that are within the veil? But now alas! He can only, like the lapsed angel, compass the earth to and fro in his thoughts, and to send it as low in his lasts.

Oh my God, continually this sad change which sin has made in me, not so much destroying my faculties, as perverting them; I have not lost the use of them, but the rectitude of them. I am no more weary of sending, and a swift stream of running; the same weight of sin that hinders me from running the race which is set before me, hurry’s meeting to evil and makes me, through the impulses of St. an, to gather strength by an accessory impression. In the birth of sin I am like the Hebrew women, lively and quick of delivery; but in the bringing forth of whatever is good, like the slow Egyptian that needs the aid of the midwife.

I beg of thee holy Lord to heal my distress by thy grace,
And to renew me in the spirit of my mind
That I may run the way of thy commandments,
When thou hast enlarged my heart.