How Spurgeon makes an abstraction concrete: A great strength of Spurgeon’s preaching lies in his ability to make abstract concepts concrete, tangible. Ideas have very little effect upon us until we bring them down from the realm of idea and place in the tangible world. A great deal of doctrinal preaching fails because it treats doctrine as a bare idea rather than a tangible fact. (Incidentally, the same is true of all discourse. We little discourse in the public sphere beyond religion and politics which is meant to move people into action or belief — no wait, there is advertising, which is wholly concrete. The abstract is abstracted from advertising, hidden under picture and demands).

And first the sin of unbelief will appear to be extremely heinous when we remember that it is the parent of every other iniquity.

The proposition is that unbelief is the predicate of all other sin: we cannot sin without unbelief. Paul makes this point

23 But whoever has doubts is condemned if he eats, because the eating is not from faith. For whatever does not proceed from faith is sin.

Romans 14:23 (ESV). How then does Spurgeon drive this point home? First, he repeats and rephrases: this is critical in oral discourse. You cannot assume that someone has caught the full wait of your words on the first pass. Repetition and rephrasing are extremely useful:

There is no crime which unbelief will not beget.

Then Spurgeon makes an interesting move to slow down the issue:

I think that the fall of man is very much owing to it.

He does not say, The fall of man was caused by unbelief. Rather, he begins with “I think”. There is a matter of meditation not demand. Let’s think about this together. He is drawing his audience up alongside to contemplate with him:

Here, he turns the event into a play. Come here with me and let’s watch the primeval temptation.

It was by means of unbelief—that thin part of the wedge—that the other sin entered; curiosity and the rest followed; she touched the fruit, and destruction came into this world.

Some of the weight of this image will be lost here: “the wedge”. We don’t cut firewood (at least those of us who live in cities — which is almost everyone; my family in Montana buys pellets). The wedge of a device shaped like an ax head. It was placed against a piece of wood to be split, and a hammer was brought against it.

Since that time, unbelief has been the prolific parent of all guilt. An unbeliever is capable of the vilest crime that ever was committed. Unbelief, sirs! why it hardoned the heart of Pharoah—it gave license to the tongue of blaspheming Rabshakeh—yea, it became a deicide, and murdered Jesus.

Here in quick procession he moves from Adam to Christ. Spurgeon cannot see anything without seeing the Cross:

Unbelief!—it has sharpened the knife of the suicide! it has mixed many a cup of poison; thousands it has brought to the halter; and many to a shameful grave, who have murdered themselves and rushed with bloody hands before their Creator’s tribunal, because of unbelief.

This move is extraordinary: the reference to “suicide” brings us to Judas. He he does not dwell on Judas, rather Spurgeon makes the general point that suicide is the effect of every unbelief. He doesn’t speak of hanging oneself, but rather of poison: Spurgeon broadens the terror. If you are now in unbelief, you are mixing yourself a glass of poison. 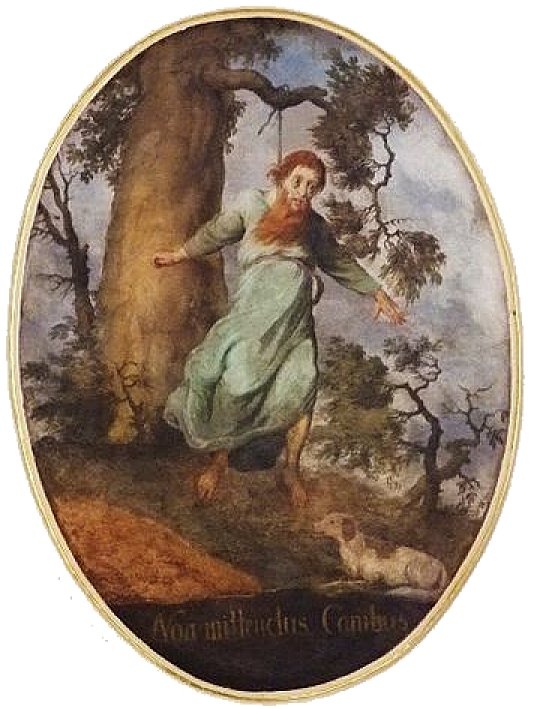 All who are judged guilty on the Last Day have committed suicide.

May I now stop to make a point: The Gospel is plainly this: you can do nothing of merit to avoid damnation, but God has done all. No one is saved because he is better than anyone. We are saved when we admit that we are not so.

I am a Christian because I am possessed by a moral certainty that I am and never will be “better” than any man. I am so well acquainted with my sin, that I cannot believe that any man is worse than me.

Here Spurgeon makes a point of common grace: the only reason there is no more sin in the world is that Spirit of God has restrained that sin.

Give me an unbeliever—let me know that he doubts God’s word—let me know that he distrusts his promise and his threatening; and with that for a premise, I will conclude that the man shall, by-and-bye unless there is amazing restraining power exerted upon him, be guilty of the foulest and blackest crimes. Ah! this is a Beelzebub sin; like Beelzebub, it is the leader of all evil spirits. It is said of Jeroboam that he sinned and made Israel to sin; and it may be said of unbelief that it not only sins itself, but makes others sin; it is the egg of all crime, the seed of every offence; in fact everything that is evil and vile lies couched in that one word—unbelief.

C. H. Spurgeon, “The Sin of Unbelief,” in The New Park Street Pulpit Sermons, vol. 1 (London: Passmore & Alabaster, 1855), 19. Spurgeon then makes the point that all believers sin from the same failure: it is unbelief that leads to sin. There is no sin without unbelief.