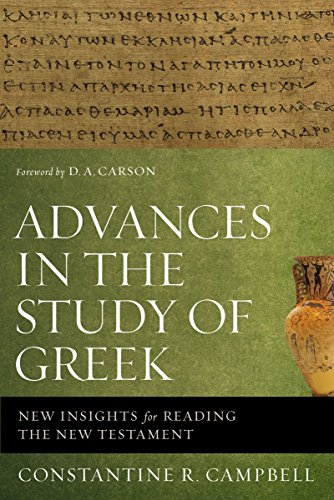 The title gives away the theme: The book concerns the study of the Greek language, primarily the study of Koine Greek (the Greek of the New Testament). There are ten chapters: 1) A history of the study of Greek. 2) A brief overview of the linguistics and linguistic theories. 3) Lexicography. 4) The middle voice (is there such a thing as a deponent verb?). 5) Verbal Aspect and Aktionsart. 6) The nature of word choice by a particular writer (idiolect, genre and register) 7-8) Two chapters on discourse analysis (one chapter on Hallidayan & Levinsohn/Runge). 9) A chapter on Koine pronunciation. 10) A chapter on teaching Greek.

The book is well-written throughout. Campbell write clearly. A great strength of the book is his ability to summarize and introduce arcane or complex subjects with clarity and precision. For instance the second chapter on linguistic theories was written largely as an introduction to the subject. My understanding of linguistic and linguistic theory is was limited and scattered. However, I had no difficulty in following Campbell’s summary of the subject. Even in the areas where I did some experience (such as Saussure) were useful by putting the theories into context.

Campbell also uses well-formed charts to summarize areas of relationship (such as the areas of linguistic study or “discourse strands and indicative tense-form patterns”).

The limitation of the book is in the nature of the book: it is an overview of the historical development of the study of the Greek language. This means that no-one subject is thoroughly covered. However, at the end of every chapter, Campbell provides a helpful list of further reading.

One could read the book and learn a great deal about general subjects of linguistics, the history of the story of Greek, pedagogy, and discourse grammar without the ability to read Greek. Yet, the book is about the Greek language and it assumes a familiarity with Koine Greek, verb forms, et cetera. Campbell assumes the ability to read Greek.  However, if one has limited Greek reading ability, it would be possible to simple skip over such sections (there not many untranslated Greek quotations).

If there were an “ideal reader” of the book, I imagine it would be a student of the Greek language casting about for a general PhD topic. Campbell draws out the various strands of Greek study and leaves them at the open issues for further study.

I thoroughly enjoyed the book. However, this book is not for everyone (as is evidenced by the topic). .

I will mention elements from the various chapters in other posts

2 thoughts on “Book Review: Advances in the Study of Greek”