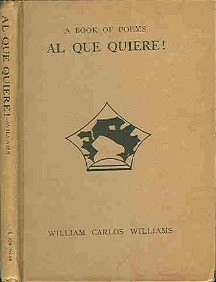 In a previous post we noted that Williams wrote a series of three poems (published in Al Que Quiere! (1917)) concerning the poor. There was a certain ambiguity in the first poem Pastoral (there is a second poem also named “Pastoral”) concerning Williams’ relationship with the subject: was he mocking the poor or the pastoral form? Was he objectifying the poor and thus dehumanizing their plight? How should we resolve these questions.

In the second poem of the series, Apology, Williams considers not the home of the poor, but the poor themselves:

Why do I write today?

stirs me to it:

in cast off clothing

of your faces stir me –

but not in the same way.

Here, Williams considers the “terrible faces” of “our nonentities”.  First we must note that “terrible” does not have the connotations of extremely bad, poor quality, et cetera. Here are some contemporary uses of the phrase “terrible face”:

Quo Vadis, “She imagined him having a terrible face, an immovable malice in the features”. (1899) The Clash, 1922, “the terrible face of the wounded man”. A short story in Good Housekeeping, The River’s End, “It was a haunting and terrible face, a face heavy and deeply lined”. The courage of Captain Plum, 1924, “Nathaniel tried to stifle the cry on his lips, tried to smile, to speak — but the terrible face that stared up into his own held him silent, motionless.” [Both The River’s End and Captain Plum were written by James Oliver Curwood, he apparently like that phrase.] In fact, 1919, was the highpoint in the use of the phrase “terrible face”!

These faces are thus peculiarly striking, they are faces that do something to the observer.

Williams does not speak of horror of these faces, for he refers to the “beauty” of these “terrible faces”. He is walking along and arrested by the horror which has marked and the beauty which shows from the faces of these poor “colored women”. Here are the most downtrodden and he sees them.

There is nothing romanticized about their appearance, and he yet finds elegance here: their faces are beautiful and like “Florentine oak”: a phrase which has a whiff of the ancient world. When combined with the phrase “terrible face” it may not be reading too much allusion to think of some Roman demigod.  Their castoff clothing is then a kind of disguise.

But at the same time, these are poor women in poor clothes walking home from a difficult job as night descends. These women have become real to him. It is as if he has just noticed them.

And note the title, the poem is an “apology”: I am sorry, dear reader, leading citizen, that I have noticed the beauty and humanity of these fellow-creatures whom you have seeming not seen.

He then addresses his “leading citizens” directly: “your faces” — which are “set pieces” also have an affect upon me.

The last line then comes as a cut, “but not in the same way.”

There is nothing smug in Williams consideration of the poor. Rather than objectifying the poor, they have intruded into his conscious as real people. This is not to say he does not recognize a profound distance. He does not pretend to enter into their world. He offers no help. He does nothing to change a thing.

This is only a poem: not a call to some action. But I think for making itself a bare poem — without the pomposity and politics which mar most (all?) contemporary poetry (nothing is so dull and limiting as politics in poetry — the politics are jejune and the poetry is mundane) — makes it more powerful.

The poor who are so often not recognized have become quite real. They are there in beauty with their “terrible faces”. The “leading citizens” are criticized because they have missed what he has found.

These poor women must first become human beings in the eyes of the “leading citizens” before anything can be done. Otherwise, the response to these women will be render them something less than human, lacking agency: objects of the leading citizens’ largesse rather than human being deserving of respect on the same ground as any human: both good and bad.

These women, after all, have “terrible faces” and “beauty”.