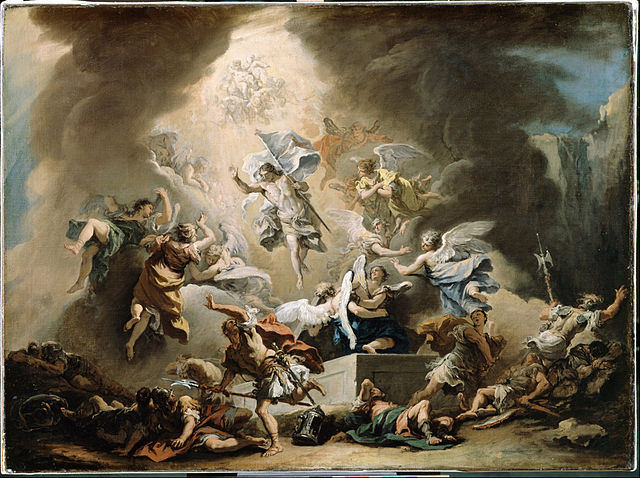 Here is the question of death in a way that differs from Dylan Thomas’ hopeless view of the matter.

WHO has not asked this question, in suspense, in hope, or in fear? We know that we must all die: we know that those who are dearest to us must die: can our eyes penetrate beyond the veil which death lets fall? Is there any answer in the nature or heart of humanity to the question of Job, “If a man die shall he live again?”

If we look at the history of nations and religions, we see that the whole tendency of man has been to answer the question in one way. “Looking at the religion of the lower races as a whole,” says Dr. Tylor in his Primitive Culture, “we shall at least not be ill advised in taking as one of its general and principal elements the doctrine of the soul’s future life.” The idea of the extinction or annihilation of man in death is indeed not so much a natural as a philosophic or doctrinaire one; an untaught mind is incapable of it, and it only appears as a fruit of reflection or speculation. The natural inclination of man everywhere is to believe not in his extinction, but in his survival. The ideas attached to the word may be vague, but they are real, and they exercise a real influence upon the life.

As he looks upon the range of human beliefs on this matter he makes this observation:

What strikes one most in looking at this widespread, one may truly say this universal, faith in man’s survival of death, is its moral neutrality. All men survive, and they survive in practically the same condition, whether they are good or bad. The world into which they pass is conceived as a shadowy unsubstantial place, and the life of those who tenant it corresponds.

I have seen this to be true. I once spoke with people visiting the place a young man was murdered in a gang drive by (one rival gang against another). The friends of the slain man were quite certain that their comrade who died in connection with his criminality was alive in the same place as everyone else.

Having reviewed both beliefs of many cultures and having traced the issue through the Scripture, he comes to the Christian hope in full:

Christians believe in their own resurrection to eternal life, because they believe in the Resurrection of Christ. But faith does not depend upon—it does not originate in nor is it maintained by—the Resurrection of Christ, simply as a historical fact. The Resurrection of Jesus is not simply a fact outside of us, guaranteeing in some mysterious way our resurrection in some remote future. It is a present power in the believer. He can say with St. Paul—Christ liveth in me—the risen Christ—the Conqueror of Death—and a part, therefore, is ensured to me in His life and immortality. This is the great idea of the New Testament whenever the future life is in view.

Having shown the ground of our hope, he returns to Job’s question from his introduction, but this he rephrases it:

“If a man die,” asked Job, “shall he live again?” Let us put it directly, If I die, shall I live again? It is not worth while putting it as a speculative question: the speculators have not been unanimous nor hearty in their answer. Faith in immortality has in point of fact entered the world and affected human life along the line of faith in God and in Jesus Christ His Son. Only one life has ever won the victory over death: only one kind of life ever can win it—that kind which was in Him, which is in Him, which He shares with all whom faith makes one with Him. That is our hope, to be really members of Christ, living with a life which comes from God and has already vanquished death. God has given to us eternal life, and this life is in His Son. Can death touch that life? Never. The confidence of Christ Himself ought to be ours. If we live by Him we have nothing to fear. “He that eateth My flesh and drinketh My blood hath eternal life, and I will raise him up at the last day.” “Verily, verily I say unto you, if a man keep My word, he shall never see death.” “I am the Resurrection and the Life: he that believeth in Me, though he were dead yet shall he live, and he that liveth and believeth in Me, shall never die.” Believest thou this?

I lament that many Christians today think of the afterlife more in line with Plato than with Jesus or Paul. Some devout Christians are captured with a vision that when they die, they will float about heaven like Caspar the friendly ghost, play volleyball with the angels on the clouds, and glide between stars like a mannequin in outer space. Michael F. Bird, Evangelical Theology

That sounds dreadful, an eternity as an idea! I love the sound of wind, the feel of rain, the smell of salt as the ocean meets the shore. Thank God that he has not left us without a hope that we will never know the touch of an other. Thomas touched Jesus. Jesus ate bread and fish. A life without death is a great blessing; a life without a body, hideous.

This is perhaps the most joyous section of all Scripture:

1 For we know that if the tent that is our earthly home is destroyed, we have a building from God, a house not made with hands, eternal in the heavens. 2 For in this tent we groan, longing to put on our heavenly dwelling, 3 if indeed by putting it on we may not be found naked. [Without a body] 4 For while we are still in this tent, we groan, being burdened-not that we would be unclothed, but that we would be further clothed [by an uncorruptible body], so that what is mortal may be swallowed up by life. 5 He who has prepared us for this very thing is God, who has given us the Spirit as a guarantee. 2 Corinthians 5:1-5

I remember first reading Whitman’s hope for the immortal (in high school I think it was), and I still have the same question: What did he think it was? How did he claim to know? Was it just the mid 19th Century (desire for) transcendence? Is it just the irrepressible desire for life and the knowledge that we know that we were not created to bloom and fade life flowers (and yet we do). Is Whitman hoping for his own life, for the life of the father and daughter — or is he merely pointing at an impersonal permanence?

For we did not follow cleverly devised myths when we made known to you the power and coming of our Lord Jesus Christ, but we were eyewitnesses of his majesty.
–Peter’s Second Epistle, chapter one, verse 16.

23 since you have been born again, not of perishable seed but of imperishable, through the living and abiding word of God;
24 for “All flesh is like grass and all its glory like the flower of grass. The grass withers, and the flower falls,
25 but the word of the Lord remains forever.” And this word is the good news that was preached to you.
–Peter’s First Epistle, chapter one, verses 23-25.

ON THE BEACH AT NIGHT

On the beach at night,
Stands a child with her father,
Watching the east, the autumn sky.

Up through the darkness,
While ravening clouds, the burial clouds, in black masses spreading,
Lower sullen and fast athwart and down the sky,
Amid a transparent clear belt of ether yet left in the east,
Ascends large and calm the lord-star Jupiter,
And nigh at hand, only a very little above,
Swim the delicate sisters the Pleiades.

From the beach the child holding the hand of her father,
Those burial-clouds that lower victorious soon to devour all,
Watching, silently weeps.

Weep not, child,
Weep not, my darling,
With these kisses let me remove your tears,
The ravening clouds shall not long be victorious,
They shall not long possess the sky, they devour the stars only in apparition,
Jupiter shall emerge, be patient, watch again another night, the Pleiades shall emerge,
They are immortal, all those stars both silvery and golden shall shine out again,
The great stars and the little ones shall shine out again, they endure,
The vast immortal suns and the long-enduring pensive moons shall again shine.

Then dearest child mournest thou only for Jupiter?
Considerest thou alone the burial of the stars?

Something there is,
(With my lips soothing thee, adding I whisper,
I give thee the first suggestion, the problem and indirection,)
Something there is more immortal even than the stars,
(Many the burials, many the days and nights, passing away,)
Something that shall endure longer even than lustrous Jupiter
Longer than sun or any revolving satellite,
Or the radiant sisters the Pleiades.